I didn’t expect an intro like this. You hear a crowd cheering as if Nas is about to address his congregation or something. I think that’s a pastor shouting soundbite during the breaks. If it is, damn. It does have the church feel if you pay attention to that organ piano, slow tempo, drum roll and those cymbal crashes. This is a hell of an intro that Nas chose to lay. Afterwards, you will probably agree that he really didn’t need an introduction. “No Introduction” is a different feel from usual Nas track, but it manages to impress.

“She says ‘third leg from a legend is sheer heaven’” lmao

Update: after writing this, I found the sample. It is indeed a gospel record from Kirk Franklin. Check the rest of the album samples at the bottom of this post.

The beat is hard with a gritty melody and Nas eats it. From the start, Nas stans will be happy to hear this from him. With historical references from Jack Dempsey to Frank Sinatra, this one is purely lyrical. Though the beat is nice, Nas outshines No I.D. here.

“Timbs was 40 below, waves to the side of his dome, definition of a good nigga yo”

The strings told me that this sample had to be a movie score from somewhere. Salaam Remi’s beats for Nas are a clear mixture of him and Nas’ styles. The drumloops are always vintage hip hop but the melodies are “different”, that’s how I can describe this beat along with a few others. It works. Nas goes down the lists of all his real guys in Queens. It plays out like a slideshow of the streets of Queens back when he was coming up.

4. Accident Murderers feat. Rick Ross (Produced by No I.D.)
Those organ notes, smh. No ID is 2 for 2 so far.  What I don’t like about this track is the chorus; it doesn’t flow with the busy beat at all. What surprises me is how Rick Ross held his own with a nice flow and wordplay. This is a solid track.

“They say the coolest players and foulest heartbreakers in the world, God gets us back he makes us have precious little girls”

Not too much I need to say about this one. The No I.D. and Nas chemistry is evident already. Its hard not to just listen to the beat but Nas manages to grab my attention with a great track about his daughter and all the “brothers with daughters”. I’m loving this track, it has been in major rotation from me since it dropped.

Damn Mary J, you sounding so good right now. It got that ’93 feel but that may attribute to how Mary J Blige sounds on this drumloop, it’s so What’s The 411-ish. The overall beat is alright but I do like when that synth comes in. The sample is low – I can barely hear it, maybe that was on purpose because the drumloop is all I hear for the most part. All Cormega fans will recognize the familiar sample pretty quickly. After all that, Nas delivers some strong verses talking about his life, the future and giving his view on some things. 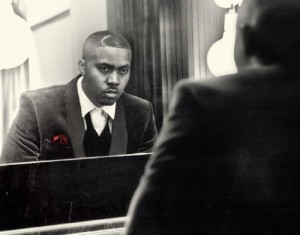 “We all need faith cause the world keep changing / let go of the illusion, start some restraining”

All the addictions of the world that surrounds us all, this is an interesting track. The verses are thought provoking, there’s plenty for food for thought to digest here. The Anthony Hamilton feature was a nice addition, he did his thing. The production by S. Remi is chilling and again, sounds like a movie score during a plot-twisting scene. Great track.

Not feeling this one at all. You will see that the lyrics from Nas is there, he did what he was asked but everything else about this track is not good. The chorus is annoying, Swizz and Miguel could have been omitted. Nothing great about this track, skippable for me. This is a misstep in the album.

Buckwild provided a smooth beat to ride to. It kind of lured my attention for the first few listens, it reminded me of some old Anita Baker. Nas drops some good verses and the chorus is alright. Overall, its a solid track. It might grow on me more in time.

10. Back When (Produced by No I.D.)
“But I don’t sweat it, study long, study raw / My man Dion said “Nas over-think the songs he writing”

Props for that MC Shan sound bite, it’s a nice touch. Nas simply “reminisce and think about the fly days / nothing like them 80s summer NY days”. The harmonizing in the background adds so much to the feel on this track. No complaint here, my head is steady bobbing.

“Fuck sadness, had this been you having this lavish / Habitual happiness at me you wouldn’t look backwards / You would have sex on condominium roof decks”

The thing that gets me on the track is that Jamaican bassline, my goodness. Now this is how a single for the club should sound. Crazy energy with some ill lyrics.

“we hate eachother but its love, what a thug mystery”

Ahh man, damn you No I.D. No drums, just loop the sample – it’s that sick. You know I’m a sucka for those jazzy horns and soft harmonizing. I could listen to this instrumental for hours, this joint is smooth. Lyrically, this is signature Nas. He breaks down the Stay theme with a chick with good sex and a hater. Currently this one is my favorite.

“For real the world so ill, yo I want a girl so real who not after material wealth but get dough still…”

Pardon me, but this is my first time ever hearing Amy Winehouse sing. She sounds good and this lighthearted groove compliments her voice well. I might have to check out more from her. Nas speaks on what his ideal woman looks like. The flow is there. Salaam Remi provided a backdrop that paints a glowing picture of a “good life”. “Cherry Wine” is a banger. Single-quality in my opinion.

“I thought no one could stop us, matching gold watches / I was your Johnny Depp, you was my Janis Joplin”

This is a track speaking on his situation with Kelis. He’s reminiscing on their good times but also moving on. I like the Guy sample and how it was used. Remember how Common’s “Love I Lost”, the sample fitted the track perfectly and the vocals in it captured the overall mood? Same is here. The lyrics and production are on point.


16. The Black Bond (Produced by Salaam Remi) – Smooth track with Nas giving vivid descriptions of him living it up out in some foreign country, James Bond style.
17. Roses (Produced by Al Shux) – Nice sample that Nas too advantage of. Overall, impressive track.
18. Where’s The Love feat. Cocaine 80s (Produced by No I.D.) – Cool track, the verses are a standout.
19. Trust (Produced by Boi 1da) (iTunes Bonus Track) – Title says it all. Nice beat with some dope verses.

Conclusion: Get the deluxe version; the bonus tracks are worth the extra cash. They are all album quality, not throwaways. Nas is still one of the sharpest out with the lyrics, I dont think I heard a bad verse during this whole album. There was one bad track and a couple tracks with minor issues. The rest were on point. For all Nas fans I think the thing that is most uncertain is Nas’ beat choices. Well on this album, his choices were on par. No I.D. and Salaam Remi handle the majority of the album, the production is there. Subject matter is balanced, typical Nas. Overall, great album. One of the better ones I’ve heard this year. Get a listen and see if you think the same. Overall Rating: 9/10

Top 3 Favs: Stay, Back When, Daughters

One thought on “Nas – Life Is Good Album Review”